too much to do

Totally ran out of time this morning! I had grand plans to make a cat out of a darker medium, but resorted to rice cheese with the intent to added nori stripes to him, but not even that materialized before it was time to shuffle the boys out the door to school... 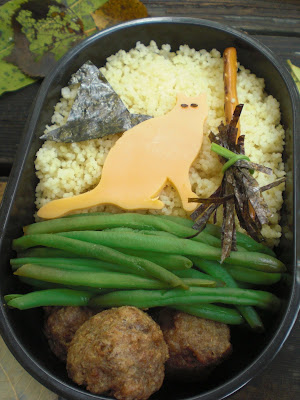 The broom looked a little neater until my first leek tie fell off because I'd cut it too short, so I left it longer the second time, but the broom bristles got quite ruffled in the process.

What I needed the time for this morning was preparing a platter of food for AJ's kindergarten Halloween party. The school nurse declared the 1st grade rooms "no food" zones due to so many different food allergies, but AJ's half day kindergarten was allowed "fresh fruit, canned fruit, fruit juice & water", since they ONLY have nut and dairy allergic children! The room parent and I chatted about plans and decided we'd break the rules and include raw carrots...gotta have orange & black for Halloween after all! I brought tiny boxes of raisins to donate to the goody bags, along with this: 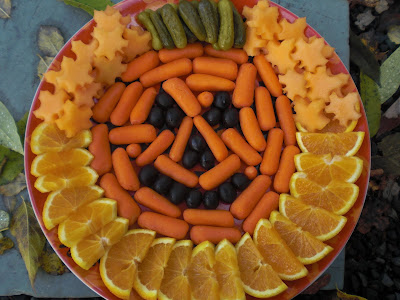 Halloween party platter: cantaloupe "maple leaves"; gherkin pickles (hey, biologically they're a fruit!); baby carrot & black olive "pumpkin"; orange "smiles". The platter was returned to me empty, so I take that as a success. AJ said he had a great time. But the big fun was their Halloween parade with all 5 kindergarten classes to show off their costumes to the rest of the school and next door to the assisted living residence where they were also read a Halloween story. 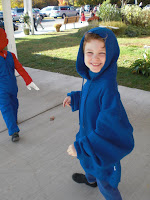 It turned out to be
a perfect fall day for
the parade. AJ was
recognized by the
older kids (who were
more likely to be
familiar with video
game characters) as
a Blue Flower Pikmin,
and the boy in front
of him happened to
be dressed as Mario. (Two years ago AJ went as Luigi from Luigi's Mansion.) 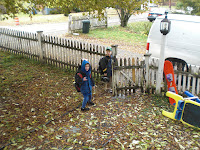 It's hard to tell AJ is even
wearing a costume though.
Here's a slightly better
picture of him leaving for
school in the morning.

As if I weren't busy
enough, I wanted to make
some cupcakes for one of
my husband's employees, so I spent yesterday doing that--saving back 3 for the boys--and I managed not to make any extra for myself! 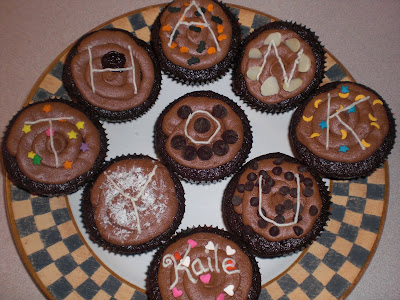 Stay tuned for another crazy day of Halloween fun tomorrow!
Posted by veganf at 3:26 PM

I'm in LOVE with your fruit platter PUMPKIN! That is soooo cool! I was googling for ideas to bring to my daughter's party on Thursday and I am totally making this platter - THANK YOU!!!! :-)