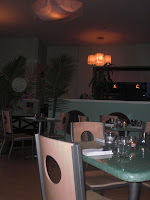 Prana Cafe is the newest
raw vegan restaurant in
the Boston area. I was ready
for a treat while eating only
raw foods, but most decent
restaurants (not to mention
raw restaurants) aren't very
kid-friendly. Not Prana Cafe!

I didn't get any photos of the
outside of the restaurant
because it was POURING rain
the sunday evening we went. There were quite a few customers despite the weather, many with one child. In we walked with four! They had to push two tables together, but other than that, the play area accommodated everyone. Yep, a play area! At a raw vegan restaurant! And they have a kids menu! And vegan wine for the grownups! Score. 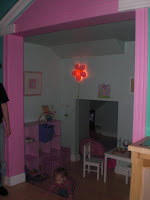 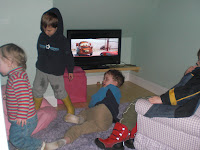 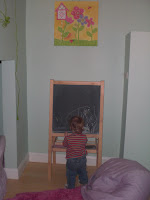 There were nice toys, mostly
wooden, puzzles, chalkboard,
and bean bag chairs and kid arm-
chair in front of a flat screen tv
playing kid-friendly dvds. Yes,
I actually got to enjoy my 1/2
glass of Australian white wine!

The dark evening and chasing
after Maia resulted in poor photos of the restaurant interior as well as the food...which I never seemed to get a picture of until it was at least half eaten. We ordered a lot of food, but for 6 people $100 isn't bad for a raw vegan mostly organic meal with raw ice cream and pudding for dessert! You can take a look at the menu here...notice "The Hello Kitty: Pasta" on the kids menu! 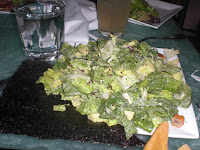 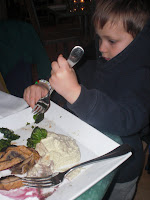 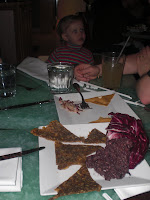 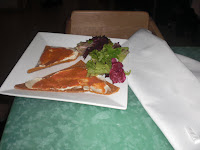 Each of the kids had different preferences. Ryan, who usually likes most anything, was rather particular; besides dessert, he only cared for "The Best Salad Ever", pictured above with what remained after he attacked it, LOL. He took one sheet of nori and made a wrap with the lettuce, then proceeded to pick out all of the avocado and raw croutons, leaving me with just some lettuce & nori. Thanks, kid.

The portobello "steak" was just a marinated mushroom with a nutty topping which I quite enjoyed, but my husband who usually likes mushrooms quite a bit did not. What I really loved was the parsnip mash on the side! But then I like parsnips. On the same plate was a heap of marinated broccoli, which constituted the bulk of Nate's dinner; I only got a few bites of the broccoli, but man was it good!

The other thing I really loved was the onion flatbread with olive tapenade. However there were not nearly enough pieces of "bread" (more like chips really) to consume all of the tapenade...and I was really heaping it on! So I brought it home, along with the extra parsnip mash, and ate it for breakfast with my own raw flax crackers.

Probably the least favourite among the kids oddly enough was "The Ariel Pizza-Pizza" off the kids menu. I think a lot of it had to do with expectations, because it just didn't taste anything like any of the pizzas they're used to. Maia was the one who ate the most of it.

My favourite, which only Maia also loved, was the winter squash rav 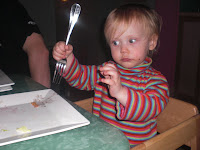 ioli with citrus cream sauce. The portion was again rather
small, but had a really delicate
citrus flavour. I'd have liked
more of some sort of sauce, as
there was only the smallest
dab on top of each triangle
ravioli piece.

What I failed miserably that 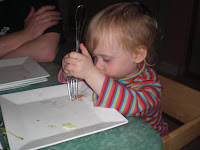 night to capture was the
artistry of the food and the
beautiful decor of the
restaurant. The presentation
of each dish was exquisite.
And as I always say...the
first bite is with the eye! 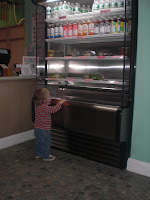 I definitely can't wait to
return for another meal.
The service was excellent,
the atmosphere lovely,
and there are so many
desserts (like the coconut
cream pie!!) among other
items that I'm dying to try!

Prana Cafe is located at 292 Centre Street, Newton Corner, MA
617-527-7726
They have recently expanded to offer dinner hours (hence why we made it there!).