No bento to show for the day. Ryan SLEPT LATE, and said his nose was stuffy. Ryan does NOT sleep late, never has. So when he said he was still tired, too tired for video games in fact, I thought I'd better keep him home from school. 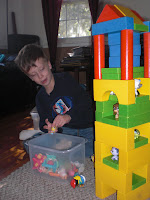 Of course by 10am I heard
nothing but complaints like,
"I'm bored", "why can't I
play my DSi", "can I go out-
side, it's not raining much
anymore", etc. Needless to
say I think sleeping in just
threw him for a loop and
it took him a few hours to
recover. 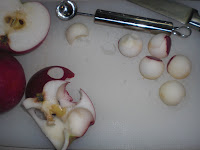 However, I attempted to
make mini candy apple
lollipops. Oy. The caramel
part went okay, though I
wasn't completely thrilled
by the taste of the recipe
I tried. But despite drying
the balls of apples well, the 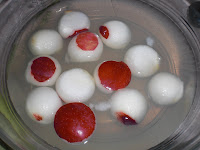 caramel did not stick, and
by the time they had chilled
in the fridge, all the caramel
and nuts and fallen into a
sticky heap around the apple
pops and I was left with slip-
pery sweet apple bites on
toothpicks (thank goodness I
didn't waste my lollipop 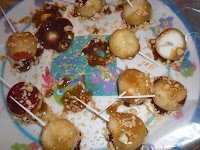 sticks on this first attempt).

Anyhow, the leftover
caramel solidified beau-
tifully in the fridge, much to
my chagrin. But I melted
some of it again and served
it over TJ's vanilla soy ice
cream topped with peanuts.
Thumbs up. But it got me thinking...what else do I sometimes miss that has caramel and peanuts?? Chocolate bars! So to finish the day on a sweet note, I melted some vegan chocolate chips, poured it into a 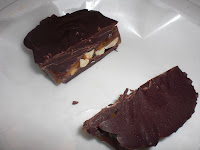 square silicon mold, added peanuts and caramel, topped it with chocolate, and froze it again.
I cut the square in half
to make two mini bars.
Mmmmmmmmm. A
perfect dessert for my
efforts. I poured a little
more melted chocolate
over the other bar for
Ryan's lunch tomorrow.
He better be going to school!
It's back to the drawing board for the caramel apple pops...I'm gonna make my own caramel recipe, maybe out of brown rice syrup? Though the agave I subbed in this recipe was tasty. Maybe a straight candy coating instead of caramel? Hmmmm...
Posted by veganf at 6:38 PM