It was time to reinstitute "Mama dates" now that Maia is eating enough to spend a few hours at home with Dada. Nate had the first turn so I helped him choose what to do. We knew we were headed to the winter garden fair at Russell's Garden Center, but first we needed lunch.

So we headed a little further in on route 20 to Finagle A Bagel. Nowadays it's referred to as simply "Finagle", but I've been eating at various locations for over a decade and I still call it by its full name. It's a Boston chain that originated in the famous Faneuil Hall Marketplace. Everything is made in nearby Newton, MA. 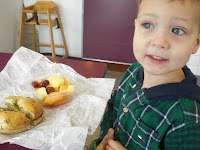 Nate chose nothing but
avocado to fill his toasted
vegetable bagel. He also
gobbled down most of a
fresh fruit bowl himself. I
swear he ate more than I
did.

All Finagle locations I've been to are unique in that your bagel can ride a conveyor belt the length of the prep counter at kids' eye level, behind glass of course. It zips through the circular cutter and down to the topping station. 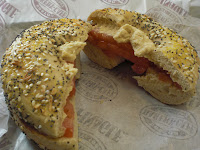 I ordered an everything
bagel with my standard
hummus & tomato. The
hummus is always nice &
garlicky.

My only issues with our
visit was being charged $6+
for what was essentially a
bagel with hummus & tomato, not an entire sandwich in my opinion. But a slight language barrier with the sunday staff left me not wanting to engage in a discussion about it...after all, Nate's inherently more expensive avocado bagel was only $2. Go figure.

What's great about this particular location is that there has always been scheduled kids entertainment here for as long as we've lived here. On Mondays from 3-4pm there is music with guitar songs for kids for free. Can't beat that! 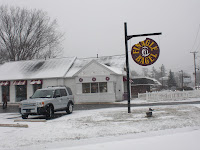