I did not learn to cook from my parents. Or any relative. Or even a friend.
I am primarily a self-taught cook, picking stuff up here and there and messing with it.

My mother was born in Latvia, a professional ballet dancer, and she does not like to cook--or really even eat. My father was mostly english and scottish, a medical photographer in NYC, and he baked bread, lots of it, for anyone and everyone...also self-taught. He could cook when he had the time, quite well, but he usually had better things to do, like play in a jazz band or fly a plane.

My mother usually cooked some version of "rice, chicken, & broccoli" for most dinners. And when my father was away on weeknights, I would frequently get served a plate of rice or noodles, with raw veggies, fruits & nuts made into a face. It was her way of avoiding cooking, but really it probably set me up for my later preference for artfully arranged food.

I remember our first microwave, when I was 10 years old. I was finally "allowed" to cook. I'd offer to nuke a hotdog for anyone who walked through the door. By the time I was 16 I would cook most family dinners during the summer months, frequently dusting off old cookbooks not touched in decades to try something new. 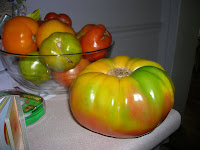 I bought my first house in
Vermont when I was 21,
and quickly started container
gardening on the porch, in a
raised bed, among the rocks
on the hill in the back...
anywhere something would
grow. I knew little about what
I was actually doing, but
seemed to have a green thumb. I once grew 39 varieties of tomatoes (I recommmend Juliet Hybrid for an easy prolific crop for the whole family)...much more than the dozen tomatoes I'd try to sell for 20 cents each from the tv table set up by the street as a kid. 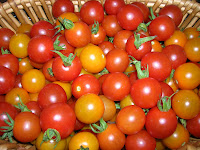 The best advice I can give to
parents is to always offer
healthy food AND model eating
it (if you MUST have junk, hide
it, save it til the kids are asleep,
but don't have it be a part of
your child's daily food choices).
Include children in the picking,
purchase and preparation of
meals. Even I went through some years in childhood when the only "green" food I would touch was mint chocolate chip ice cream. But in the end I prefer lots of vegetables, the staple of every meal for me now, and our family.
Posted by veganf at 6:54 AM

Ah, if only it was as easy as only offering healthy foods to my child. Even feeding therapy (by a professional Feeding/Speech Therapist) didn't work.
Wish I could hire you to try to get my boy to eat fruit and veggies...and other 'normal' foods!