Yes, I wore my pajamas, Hello Kitty pajamas, to two parent-teacher conferences today. There was a reason--my 5 year old's pajama breakfast (or brunch really) at preschool--but ya' know I'd have probably done it anyway as I often don't get dressed til the afternoon anyhow, if at all. Four kids will do that to a person. 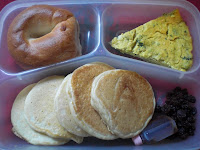 I sent vegan equivalents
of bagel w/cream cheese
(Tofutti cream cheese),
scrambled eggs (broccoli &
onion tofu quiche), pancakes
(just basic vegan pancakes
made with Vitasoy soymilk),
and real maple syrup versus
corn syrup sweetened fake
syrup. I tossed in some raisins too.
For the class we provided sliced oranges, and a bag of oranges so the kids could learn to squeeze their own juice. There were also banana slices & strawberries, cut by the kids. This was a huge amount of food, but AJ ate all but a few crumbs plus some of the class fruit, and a full size drink box of Rice Dream rice milk!
Instead of allowing the leftover fruit and class bagel pieces to be tossed in the trash, we brought them home and made fruit smoothies with coconut milk, and spread some peanut butter on the bagel pieces. 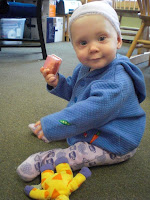 Just beforehand we met with
Nate's teacher for spring
parent-teacher conferences.
Maia came along and played on
the floor while we chatted with
his wonderful teacher. She is
just so great with the toddler
age. I wouldn't normally consider
sending a 2 year old to preschool,
but when we visited the school for
Ryan when he was 3 and found
out about the toddler class, we
just had to send AJ too. It's been a great experience for everyone. The boys have all loved going to school, never a complaint! 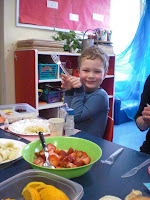 So this is AJ's third and
final year in preschool. I
think he will miss it!

Since he was having
breakfast for lunch, I
just gave the other boys
the same food in their
lunches... 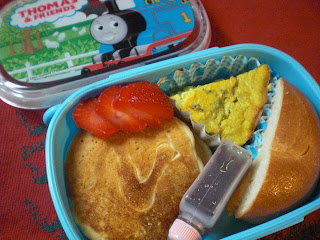 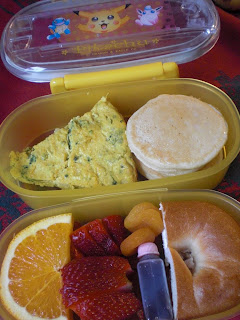 Ryan's
lunch:
same
as his
brothers'
lunches,
with the
addition
of some
dried
apricots.

At Ryan's
parent-
teacher
conference
today,
one of the
assisant
teacher's who apparently ends up on cafeteria duty commented on his awesome lunches. And his teacher said he is "very ready for 1st grade" and is doing so well in all areas of school.
Posted by veganf at 3:11 PM

We should all wear pajamas all the time! The world would be a happier (more comfy) place! :)

Your kids always look so happy, every time I come to your blog they make me smile.

How cool that the assistant teacher mentioned your kids' awesome lunches! They really are amazing lunches!