"These astrodroids are getting quite out of hand...even I can't understand their logic at times." 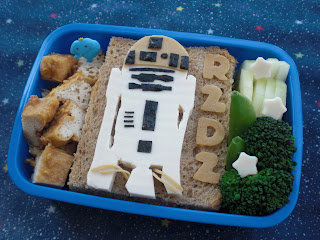 As part of receiving the Kreativ Blogger award, I must share seven random facts about myself. So consider this a prelude to next month's post about me!

#1 - I can quote all of the original Star Wars, episode IV, including the droid sounds. I lost count somewhere in my teens, but I have seen the film well over 100 times...probably double that. Just yesterday Dada 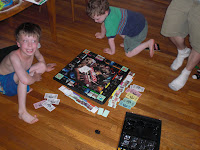 played Star Wars Monopoly
with Ryan and AJ. Ryan has
Star Wars sheets on his bed.
When we met, my husband
and I each had x-wing fighters
prominently displayed in our
living rooms, his a model, mine
made of Lego bricks. I wore
earrings made of Star Wars
ccg cards to the 12:01am showing of Episode I. Our boys could battle with toy lightsabers before they could competently say the word lightsaber. Ryan dressed as Darth Vader for Halloween last year. And I've made Star Wars bentos in the past.
But I am stubbornly refusing to allow my children to watch the animated series The Clone Wars, nor will I let them see all the movies at such a young age. I saw the first film at age 3 1/2...my mother took me and read the titles to me in the beginning. I am forcing Ryan to wait another year before seeing Return of the Jedi. Hey, I had to wait longer than that! 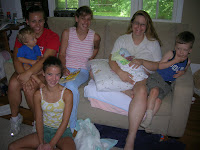 #2 - All four of my kids
were born at home, with
the same midwife, who had
all five of her kids at home
too. Two of mine--#2 and
#4--were considered
"precipitous labors" because
the entire labors were less
than 3 hours long (#2 was
half that). If you live in Massachusetts and want to find a certified professional midwife, visit the Massachusetts Midwives Alliance website. 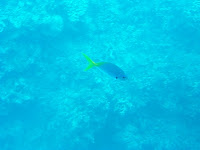 Barrier Reef was the best
time I've ever had. It was
like something straight out
of National Geographic,
absolutely perfect. Add to
that the great buffet on the
boat, Vegemite and bread
at teatime, and doing all that
with my husband (then
boyfriend) and not even the births of my children--as easy, empowering and perfect as they were--could compare. Sorry kids, no offense! We'll take you there someday! 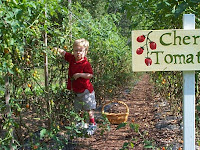 y are my favourite food. In Vermont, I once grew 39 varieties. Nowaday, we get most of our
tomatoes from Stearns Farm.
One thing I love about our CSA
is the unlimited cherry tomato
picking in August when the
crop is at its peak!
And wouldn't you know it, my
first two kids don't like tomatoes.
Oh, they like them as salsa, pizza
sauce, or in a soup. But they don't care for them plain. And then along came Nate--he will happily eat his weight in tomatoes straight from the bush. But the other boys love to help pick them regardless. And Maia had a few bites of tomato from a burrito a few weeks ago and seemed to like it...fingers crossed!
How much do I love tomatoes?? I dvr'd and saved the Jamie At Home episode about tomatoes...it's better than any adult dvd for a tomato-holic. 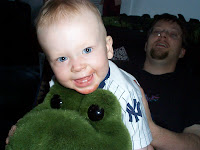 fan. You have to understand.
I live just outside of Boston. You
can get beat up wearing a Yankee
hat at the wrong time. And yet I
put my kids in Yankees shirts as
babies. But I was born in New
York City. It's in my blood.
My husband (also born in New
York state) is a traitor. He now
routs for the Red Sox. I think he just can't stand the peer pressure. Wimp.
And no, I have not made a Yankees vs. Red Sox bento...yet. 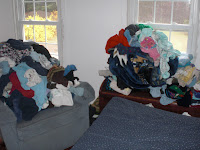 #6 - I do not iron. Nope.
Not at all. Not even the pants
I wore at my own wedding
(yes, I wore pants, not a
dress). My husband had to
use the hotel room iron to
de-wrinkle his pants before
our wedding. And I turned
down a nanny position once
when they listed "ironing the baby's dresses" as one of my would-be tasks. And it's not like the laundry gets put away promptly at home either (hey, you try it with 4 kids, 2 still in cloth diapers). The only time I even understand ironing is when you need to flatten a piece of material when sewing...and I also do not sew. 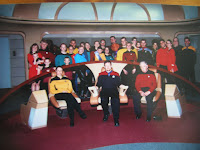 #7 - My wedding was on the
Travel Channel. Actually it
was filmed by a PBS film crew
from Chicago, in Las Vegas, and
later sold to the Travel Channel.
And get this...I've never even
seen the footage. So if you're
ever watching wedding re-runs
and you see two geeks getting married on the bridge of the Enterprise, surrounded by an entire wedding party in Star Trek uniforms, would you tape it for me? Please??
Posted by veganf at 7:12 AM

I can't believe you never got to see your wedding on tv! Can you try emailing the Travel Channel to see if you can track it down?

I could never find contact info for a real person in the necessary department. But I haven't tried again in a few years. Maybe I should...in my spare time??