Parenting only looks easy on the outside... 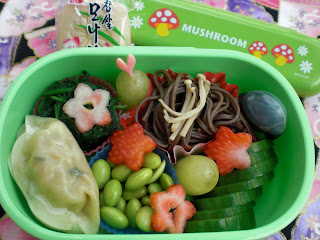 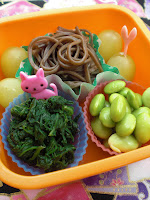 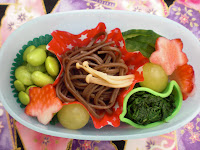 Despite the cheerful daily
bento pics, things aren't
always neat and tidy and
efficient outside the camera
frame...not that you think
they are...and I'm certainly
not trying to maintain that
illusion. But today contained
prime proof that sometimes
one's lunch is not only the epicenter but the sole source of calm and order in an entire day. 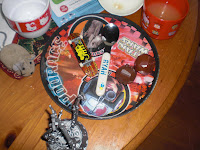 Exhibit A - the dining room
table, remnants of not one,
not two, but THREE meals,
all I must shamefully admit
served on the SAME plates...
and no, I don't mean that
they were washed in between,
I mean the same DIRTY plates.
For what it's worth, the first
two meals contained things like cinnamon toast, carrot sticks, nuts, and giant soft pretzels...not terribly messy. But surround the dirty plates (in this pic it's Ryan's, hence the "RYAN" spoon) with an unconsumed cup of oj, a dirty cereal (rice) bowl, an empty water cup, a mouse finger puppet, a wounded upside down Imperial probe droid, and a plate containing an inverted Tech Deck and two Lego boulders...well, you get the picture... 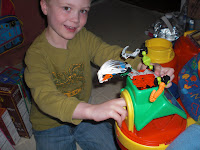 While I got lunches ready,
AJ adorned Maia's exersaucer
with Bionicles.

Nate cried for the first time
at preschool...for over an hour...
because I didn't say goodbye
apparently, distracted by AJ
needing his shoe tied in the hall...but they couldn't reach me once I'd left because my cell phone was out of juice and to top it off apparently the classroom schedule had been changed a third time and my husband was supposed to be parent helping in Nate's class today...and it was raining too of course, and AJ almost went to school in his pajamas (no there was not another pj breakfast on the schedule). 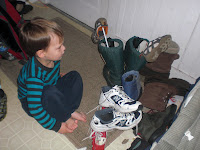 Well, after playing in the
wet yard, followed by a
handful of chocolate chips
(two handfuls for me), Nate
was back to his moody 2
year old self. He stuck Ryan's
bows into my boots and
balanced his sneakers on top.
You would not believe some
of the things I sometimes find in my shoes when I go to stick my fee 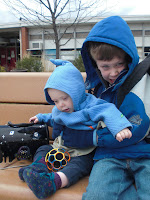 But as the day wore on
and frozen whole wheat
pizza dough defrosted on
the kitchen counter, things
began to improve. Even
though I had to wake her
from her nap, Maia survived
being surrounded by 22
kindergarten kids as the
object of Ryan's "star sharing",
formerly known as show & tell
back in the day. She smiled and drooled and babbled and "danced" and dropped her ball enough times that almost every child who wanted to got a turn to toss it back to her.

But I'm better at showing you my day through the guise of a quickly-crafted bento.

If you want daily parenting wit and humour (and Photoshop prowess I do not possess), you need to check out my friend's blog Unruly Helpmeet. She also gives away DAILY free art here. And she just invented a hysterical brand new blog award and gave one to ME! Is it stupid and lame to get a made-up award from a friend?? NO! It's even better than some "big" award from some body I don't know because a) she's not vegan & never will be b) doesn't make bentos c) only chose 5 blogs to start her award cascade with and I'm one of them! I'm totally flattered whether she likes it or not.

And so you see, every day has its finer moments.
Posted by veganf at 4:52 PM

Your Bentos are adorable (just like ya wee kiddies), nice colours(NZ spelling just for fun) and yummy to boot. Just as well most of us only post pictures of our bentos, otherwise our blogs would be called "OMG THE AFTERMATH!!!!!, my kitchen is a disaster oh btw and here is a bento" blogs.