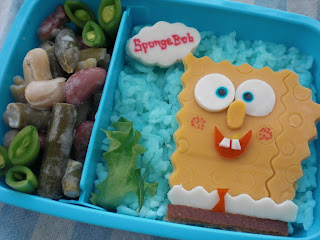 So Ryan got stung by a wasp last night after dinner! You would've thought he'd been separated from an appendage with all the noise he made.
Ryan: (screaming) "I'm so ashamed!"
Dada: "Why are you ashamed?"
Ryan: (teary-eyed) "I don't know what it means!"

LOL. He never did come up with the right word. But a Nemo ice pack helped. And a bath with the new spider soap we got as a gift from a chicken pox visitor.

Sleep sucked last night. They're doing more water & sewer construction down the street, and they pile the dirt in the town land across the street from us. Apparently last night was one of their night shifts (it's a busy street, so big stuff often gets done third shift).
The lights and beeping, clanging dump trucks apparently woke up AJ. I heard the pitter patter of 5yo feet enter the room. He stopped and looked at the clock..."Only 1:50!" WAAAAHHHH!!!
So I sent Dada in to calm him down. Poor guy thought it was time to get up and was devasted to see it was still the middle of the night.

And a few leftover kid meal pics from the weekend and the past few days... 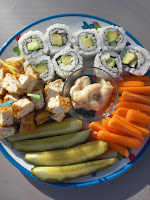 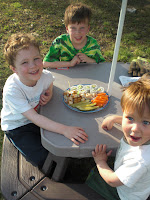 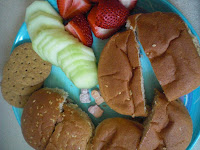 The boys have been
eating at their new
picnic table often.

Sometimes I have to
figure out acceptable
food for the neighbor
kids or friends too...
not always easy! 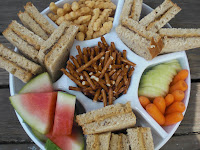 When we were out of
regular jam, I pulled
out some homemade
rhubarb jam my MIL
made for us, and some
vegan marshmallow
creme. Whew!
Posted by veganf at 7:12 AM