pancakes for the sickies 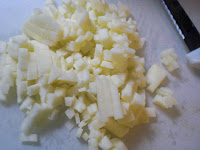 I'm always looking for
apple recipes this time
of year. Each week we
receive a bag of apples
with a different variety.
Last week's Honeycrisps
were awesome.

Today Ryan has a cold, 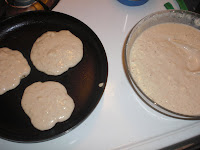 and I could tell he was
weighing art class at school
today versus video games
at home, LOL. So I just
opted to keep the boys
home. With all the flu
fanatacism this year, no one
would question me keeping
them home for a sniffle. 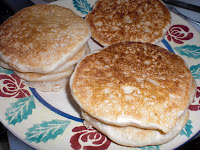 Measure soymilk and pour into a large bowl. Add vinegar and stir briefly to combine.
Meanwhile, peel and dice a large apple (or two small ones, depending on what variety you have available).
Add oil to the soymilk and beat with an electric mixer until frothy.
In a separate bowl or large measuring cup, combine flour, salt, cinnamon & baking powder. Mix, then add to the soymilk mixture. Beat with electric mixture until flour has just been incorporated.
Gently stir in diced apple.

I like to add a light spread of Earth Balance as soon as each pancake comes out of the pan. We served these with agave nectar, which is nice and light, so as not to hide the flavours of the apples & cinnamon. But maple syrup would be fine too. 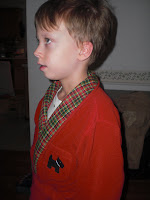 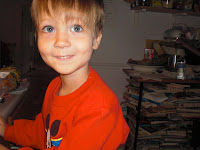 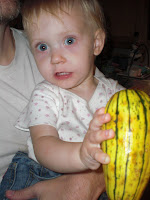 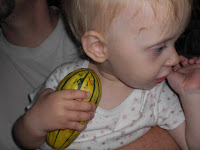 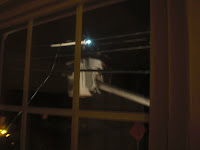 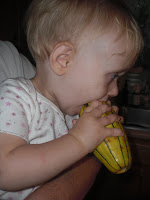 Maia chose a new toy from
the "extras" bin at the farm
yesterday--a delicata squash.

And it was probably just as well we took the day off today, since in addition to the never-ending water main reconstruction on our street, last night we were privileged to have an electric truck right outside our bedroom windows replacing the power lines to the house across the street which happen to attach to the telephone pole right outside our house. Lots of orange flashing lights and a man going up and down in a basket. Joy.
Posted by veganf at 9:31 AM

Oh those look really good! I'm thinking about taking Kidlet to an apple picking farm on Saturday and I was just thinking how I would need some new apple recipes!