So I reached my goal...a few days after the solstice. I took the cookbook challenge, using Edward Espe Brown's Tomato Blessings and Radish Teachings, cooking usually 3 recipes each week for an entire 3 month season.
There are still more recipes I'd like to try. But I'll be taking a needed break from cookbooks! This exercise reminded me that I should shuffle my cookbook around more often, and definitely pull out those few that I've barely used.
For the month of October I'll be officially participating in VeganMofo (vegan month of food) for the first time. I don't really have a theme in mind, but I post frequently enough and pretty much always on the topic of veganism in some fashion, so I don't need to do much to prepare.
Given the kids return to school and lots of stuff happening in general, I was feeling rather out of steam this last week. But luckily I had everything on hand to cook a final three recipes... 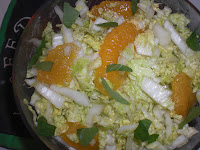 This Chinese Cabbage
Salad with Oranges
and Mint was not my
favourite, but it was
honestly better than I'd
expected. The orange and
cabbage together was a nice
combo. 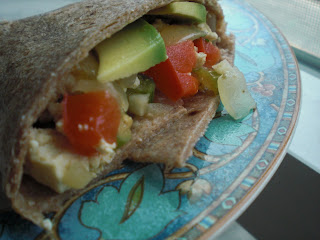 What never ceased to amaze and confuse me was the authors use of salt on salads but not in most other dishes. I just HAD to add a touch of salt to these Tofu Burritos. The avocado and salsa was a tasty suggestion, but little salt for the tofu and to bring out the flavour of the avocado was a necessity in my opinion.
Only AJ was excited about these but then didn't eat more than a few bites. I think the red pepper turn him off. Everyone else demolished them...in fact I ran out of tortillas and only got one burrito for myself, sigh. 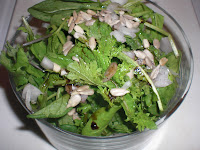 Another often simple
recipe from the book
to end on a fresh note:
the Garden Salad. Nice
fresh greens & herbs,
tangy balsamic vinegar,
with extra zing from
a shallot, topped with
sunflower seeds.

Thank you Edward Espe Brown for your gift of recipes and stories to the world. It was a pleasure reading and now finally cooking through your book! Bon appetit!
Posted by veganf at 5:13 PM

Harry Styles Merch is a branded website for Hoodies, t-shirts, Sweatshirts, and more. With designs ranging from the classic to the outlandish, you're sure to find the perfect item for any occasion.