It was Ryan's first day of 1st grade, and AJ's first day of kindergarten today. Sorry to disappoint, but AJ will only be going to half-day kindergarten, so no lunch needed this year! Horror! So I'll try to make Ryan's count extra... 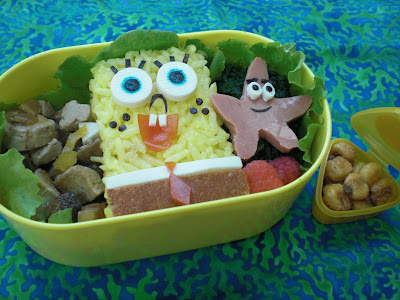 Ryan's lunch: the centerpiece was a Spongebob made of yellow rice, garnished with white soy cheese, nori, tomato, & bread crust. To the left is leftover spicy baked tofu with mushrooms & onions. To the right is Spongebob's best friend Patrick made of Yves vegan bologna, on a bed of blanched spinach, with a few raspberries tucked in on the bottom. As a side treat I included a little container of corn nuts. And for special drink I bought Ryan a blueberry soymilk yogurt smoothie. 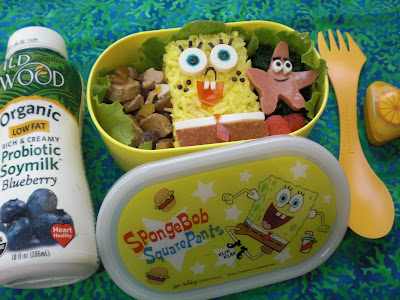 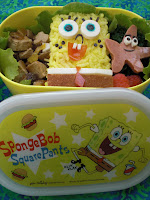 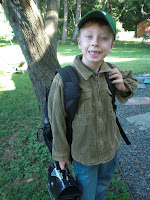 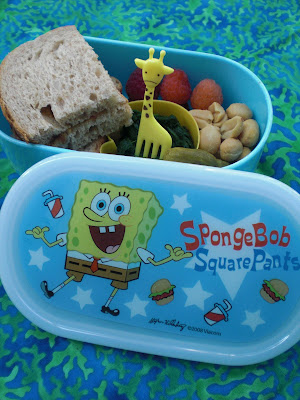 Not
trying
to fool
you,
this is
Nate's
lunch
for
grandma's
house
while
I take
AJ to
kinder-
garten
orient-
ation.
His
first
full
half
day is
tomorrow. 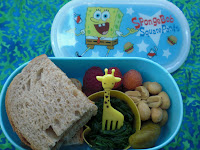 He was very excited
about the new Spongebob
container, and I saw him
shaking it as he went out
the door, so there's no telling the condition it was in by lunchtime! If only I could photograph that! Oy.

On to AJ's walk to kindergarten...he was very eager to get going, running ahead with Dada... 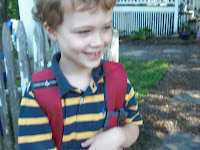 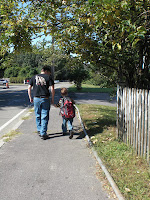 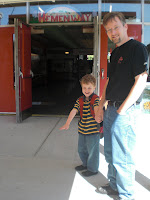 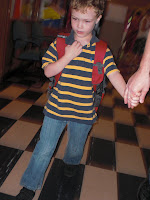 We'll see what he thinks
of it all after he's had a
few days to settle in with
his new teacher & friends!
Posted by veganf at 9:23 AM

I have my first in kindergarten this year, and made my first bento for her today. She's in half day as well, so they have a break for a snack only. I'm crossing my fingers to see how it goes over. I told her not to throw anything out because I wanted to know what she thought. I've been making bentos for myself for a while, but it sure is different making them for your kids. I haven't quite gotten my head around it yet (which is what brought me to your blog this morning).

Hey, I wondered how do kids eat something like the spongebob - do they just pick off all the bits with their fingers or do you send a fork?

In the second photo, I've shown the "spork" Ryan chose to accompany the bento. If I don't have appropriate matching mini forks or food picks, that's usually the sort of thing I toss in his lunchbox with the bento.

I just found out I'll be needing to include a snack for half-day as well, which was surprising because in full-day last year they only had an afternoon snack. But I'm thinking it's to keep bus-riders full until they can get home for lunch? Anyhow, I'm just going to throw a tiny snack in his backpack along with his water bottle, like a tiny container of crackers or something. Next year, however, is another story!

Glad you found your way here. And good luck with your daughter's first year in school!

Actually, I've been a reader for quite a while, just haven't had reason to comment until now. i love how "real life" your bentos are. Cute but not fussy.

What size are your single layer SpongeBob bentos?

Let's see...here it is: http://disposableaardvarksinc.blogspot.com/2009/08/last-day.html
450ml for the biggest one, but it looks smaller because it's a bit deeper than many bentos. I'll often include a drink other than water or a little extra something on the side. Although this year they have a morning snack versus an afternoon snack so he isn't so starved by 12:10pm for lunchtime.

Here's the link to bento size guidelines at Lunch In A Box:
http://lunchinabox.net/2007/03/07/guide-to-choosing-the-right-size-bento-box/
6-8 year olds should use approximately a 500ml bento, which is why I add a little extra something for my almost 7yo.