My husband has returned this morning from his trip (and was immediately enlisted to play Pikmin 2 by the boys...before a much needed nap). So it feels like a long weekend around here...or maybe a one day Monday weekend with jet lag?? 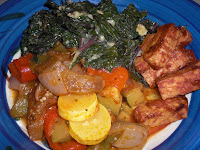 Some benefits to having one
less adult to feed: eating WHEN
I want (often after the kids
are asleep), eating WHAT I
want (he's not a big tempeh
fan), and eating HOW MUCH
I want. The last one isn't
necessarily a good thing. I
should save more for the next
day's meals, but sometimes it's my only reprieve while solo parenting and I just get carried away. So here we have my giant dinner of kale with creamy sauce, bbq tempeh, and ratatouille. 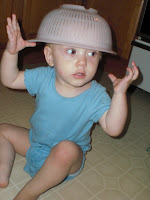 The kids TRY to be helpful.
Maia really wanted to help
unload the dishes from the
dishwasher, which has been
a favourite pasttime of each
child at this age. Only problem
here was...these were dirty
dishes she decided to unload,
and wear! 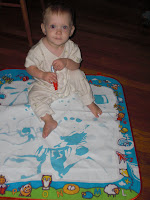 Maia and Nate spent a lot
of time with their new
Aquadoodle from their
aunt Barbara. Maia had to
be sitting ON it though,
which drove Nate crazy. 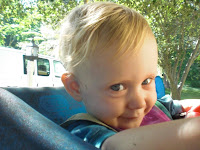 The swing often serves as
babysitter outside when the
boys are playing in their pool,
having a lemonade stand, or
I need to take brush back to
the compost. 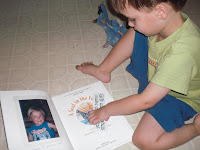 Nate got a new birthday
book from his friend born
the day after him, sent
all the way from British
Columbia. A Seal In The Family was read
immediately, a very
cute based-on-true story!

Time for another stand... 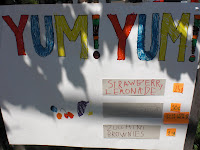 It was AJ's turn to make the
poster. He called the stand
"Yum! Yum!" and they
served strawberry lemonade,
chips & kiwi mango salsa, and
zucchini brownies. It was super
hot out, so business was a
little slower than the last time;
I think everyone was hiding 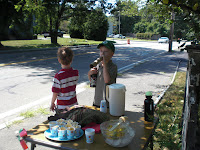 inside with the a/c on or out at
the pool or beach.

There is one tree that partially
shades the sidewalk, so we
always set up the table there.
Still, they were quite hot and
each drank an entire bottle of
water during the hour+ they
were out. But they weren't deterred, and are planning another stand for next weekend! 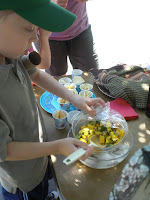 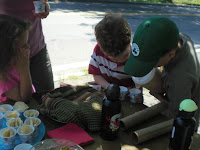 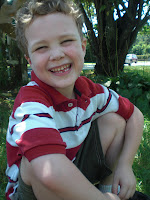 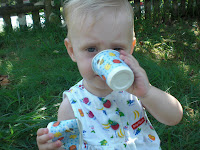 All of a sudden, she looks like a big girl!!! Love the colander hat.