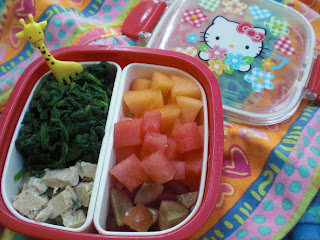 Maia's lunch in baby bites: blanched spinach; vegan chik'n salad; cantaloupe; watermelon; red grapes. I love this little Hello Kitty bento box with the two removable inserts. I've had it since before I even had my own kids! 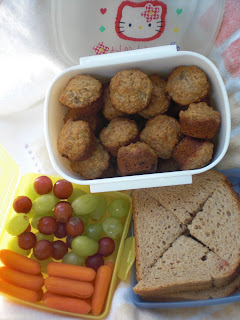 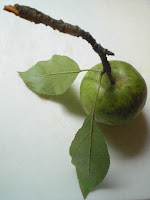 Though finances have
improved during the
past week, we're not
jumping the gun and
doing lots of shopping.
Given how quickly things
changed before, we'll
stick to frugality for the
time being! Hence my
use of these tiny tart
apples from the shade
tree at the farm... 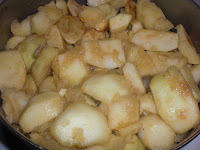 I used about 2 dozen of
these tiny apples, but
my recipe that follows is
adapted for regular apples.
I got the idea from a penny
pinching Sandra Lee
episode on The Food
Network. But she used
canned apple pie filling 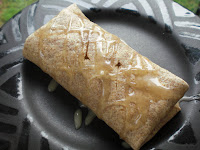 and a thick pumpkin
frosting and I just could not
do that! Here's my version,
with optional extras...

Peel, core, and slice your apples. Place in a large bowl of water with 1 T. of lemon juice as you work to keep them from browning.
Drain apples. Place in a pot, add lemon juice, sugar, and spices. Cover and cook over medium heat for 5 minutes. Add walnuts and/or raisins (if using). Stir, reduce heat to medium-low heat and cook for another 5 minutes. Stir. Cook another 5 minutes if necessary until apples lose their crunch. Cool enough to handle.

Spread 1-2 T. of nut butter on each tortilla. Spoon on a small mound of apples in the middle of each. Fold over from one end, then fold in both sides, then fold over the other end. Flip over and place on a non-stick baking sheet. Cut or poke a few holes in the top of each burrito to allow steam to escape.
Bake at 350 for about 15 minutes.
Allow to cook until just warm.

Make the icing by melting margarine (I use Earth Balance) in a small bowl. Add powdered sugar (and a sprinkle of cinnamon if you'd like) and beat together until smooth, adding a little almond milk until it is a drizzly consistency. With a spoon, drip icing over burritos. Mmmmm.... 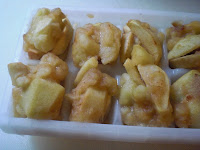 Here's a time-saving idea:
make extra like I did, and
freeze heaping portions in
an ice cube tray, then store
them in a ziptop bag. Then
when the mood hits you,
thaw one or two for a quick
burrito, ice cream topping,
or oatmeal booster!

I've been fortunate to find many great deals at the supermarket lately. Often stores will place slightly outdated, mildly bruised or overripe items, or the last few of a batch that don't look appealing on display in packages at the back of the produce department.
They don't usually mark the produce as organic or not, and sometimes mix and match organic and conventional produce, but you can usually see the stickers on most fruit and figure it out. I got 10 organic plums for a little over $2 last week, and they were perfect! Then I got a mix of 8 huge local and plum tomatoes for $3, only one of which ended up being slightly bruised and overripe. What a steal! Healthy bargains are everywhere if you keep your eyes peeled.
Posted by veganf at 5:04 PM

Your apple dessert burritos look fantastic! Great deals at the grocery store too. My favorite store does a bargain bin kind of thing. Last time I went I got a bag of 5 extremely ripe mangos and about 3 pounds of perfectly fine-looking green beans, for 99 cents each!