Can you believe I've been doing this cookbook challenge for 10 weeks?! Still going strong.
This week's recipes from Tomato Blessings and Radish Teachings are... 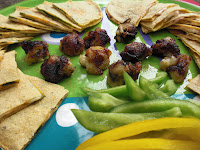 A very basic Cheese
Quesadilla recipe.
I think I would
personally like to grill
these, or at least spray
the pan with a little oil
to brown the corn
tortillas slightly. But the
author prefers the fat-free
dry saute method, so that's what I did. On the right I used his suggestion of salsa for a filling. On the left I made my own with spinach. For both I used Daiya vegan cheese. Everybody ate them, but I think I can improve these. The Daiya made these. 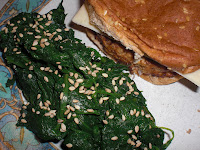 Another extremely easy
recipe was Simply Spinach.
It's really more of a method
than a recipe, telling how to
wilt spinach in a pan with a
little water, adding salt to
the layers for seasoning.
I was fine, but I prefer
blanching because dare I
say it's even easier! I ate this for breakfast (yeah, I'm weird) alongside a BBQ Sunshine Burger with vegan pepper jack cheese, onion & ketchup on a wheat bun.

My final recipe for the week was another simple one, but wow was it a good one. I thought, "it's just melon. Why would I want to mess with it? It's perfect as it is!" Given that I had fresh local organic watermelon AND cantaloupe from our CSA, I had no excuse but to try this... 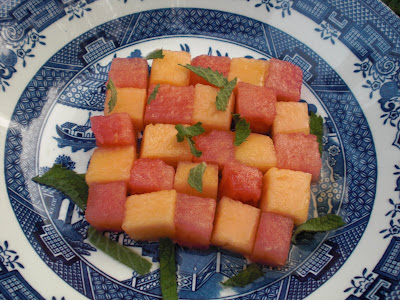 The flavours of this Melon Salad with Lime and Mint were bliss. The tiniest dressing of lime juice, maple syrup & salt, and the fresh mint leaves. Whoa. Fantastic. Everybody lurved it.
Until next weekend!
Posted by veganf at 4:52 PM