Teese cheese is a vegan cheese alternative I've been hearing good things about for some time. Last weekend I was able to try some at the Boston Vegetarian Food Festival....a quarter sized slice of the "cheddar" on a cracker, and a microscopic morsel of a bagel pizza using the mozzarella flavour. Both tasted pretty good, so I bought a sausage-shaped roll of the mozzarella to bring home. 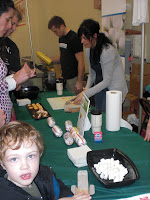 I first tried to melt a nice
round hunk of it on top of
some homemade seitan
cutlets, a la chick'n parm...
...not the best idea, and it
didn't taste too great either. 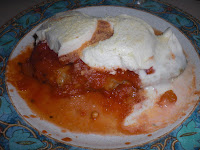 I tried it mid-week sliced
very thinly in a typical
'cheese sandwich' with
Veganaise and onion slices. Still not too good. Teese really has a funky taste plain in my opinion. 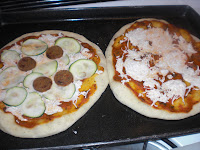 But I persevered, saving the
other half of my Teese
purchase for pizzas after a
day full of hiking. I shredded
it finely, hoping that the oven
would create the taste that
we enjoyed at the food
festival. Hooray! 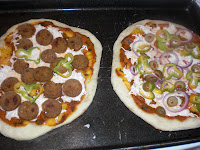 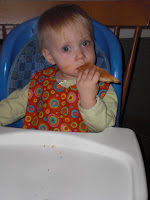 Everyone enjoyed it, even my
husband who isn't too keen on
"fake" vegan items. So I
recommend saving your Teese to grate on dishes that will be receiving the hot oven treatment, where it takes a backseat and lets the flavours of your entree shine without overpowering them.
Posted by veganf at 6:55 PM