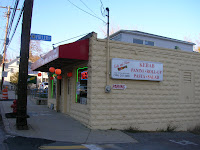 Located amidst the construction
chaos on Concord Street in the
Saxonville area of north
Framingham, Subs & More
replaces a string of unsuccessful
restaurants in the little building
next door to Subway and across
the street from the Carpet Mill
Outlet Store. The only other review online I could find is here, with just a brief menu overview. 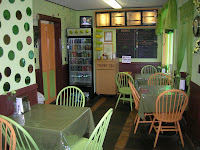 The dining area is very small,
but most people order take-
out. The restaurant also
delivers for $1.50 extra ($10
minimum). The decor is funky
and neat, but just don't come
here with a large family or a
big group.

The menu is mainly Turkish & American fare. There are a lot of appetizers, many vegetarian, some vegan, such as the Lentil Kofte, Humus, Saksuka, Dolma (stuffed grape leaves), & Falafel. The owner was kind enough to 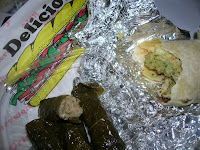 give my husband a free sample
of Dolma when he said he was
taking photos for a blog review
(thanks to both, for the sample,
and to my husband for stopping
off on Halloween evening &
remembering to take some pics).
The Dolma were actually the
best I've had--any I've had
previously have been very oily and heavy--these were not.

My husband ordered a falafel wrap, and he got a second one for me with added humus. The plain falafel wrap was rather dry, but the one with humus was pretty good. The humus had grated carrot in it which was very tasty. 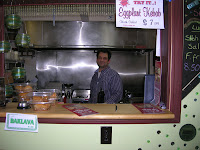 Most of the menu is heavy on
the meat. There are American
favourites like burgers, bbq,
pasta, subs & fries. And
familiar Turkish offerings such
as kebabs, gyros & greek
salads. There are also
gourmet panini sandwiches like
the regional "Red Sox" and the "Mass Pike", Turkish style sandwiches, or one vegetarian with mushrooms, roasted red pepper, cheese & black olive paste. All paninis are served with rosemary focaccia bread. 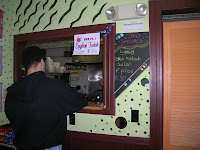 When my husband was asking
about ingredients, he was in
turn asked if he could eat
peanuts since some foods are
cooked in peanut oil. It was
nice to hear they were truly
looking out for their patrons'
interests. My husband did his
best despite the occasional language barrier. I would like to order again--maybe the falafel salad or the appetizer platter (choose any 4 appetizers for $10.50).

I hope this restaurant makes it in the questionable economy and not-so-stellar location. Their Halloween decorations were over the top and really caught my eye.

'09 UPDATE: Apparently I wasn't the only one who though the plain falafel wraps were a bit dry. The carrot salad inside the wraps now contains a yogurt dressing. So if you're dairy-free, you need to ask them to leave it off. Sigh...

'10 UPDATE: With the construction done and off-street parking available, stopping off for sides of falafel has become more enjoyable! It appears as if the restaurant is doing well. They are sporting new signage on the side of the building advertising "Mediterranean & Turkish" fare.
Posted by veganf at 8:30 AM

My husband was born and raised in Framingham, MA.

Cool! Does he still have relatives in the area?