Q was tricky indeed. I could not find quince at any of the local markets. And as it turned out, even my alphabet tater tots that I was going to cheat with didn't have a real "Q" because the holes in the middle of the letters are too small to accommodate the entire cross. Nevertheless, a P turned sideways looked very convincing... 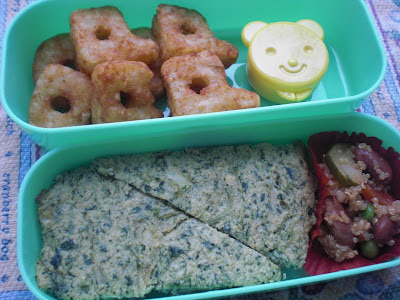 I keep trying to like quinoa. My friend Melissa of The Papaya Chronicles blogged about her new favourite quinoa recipe recently here, which is her version of this one from Fat Free Vegan Kitchen. So I made it...and 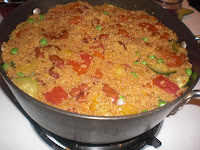 my husband taste-tested. He said it was okay, that he'd eat more later, but it wasn't fantastic.
FWIW I added some salt,
and cooked the onion &
garlic in olive oil instead
water, just to give it a
little more flavour. Ryan
thought it was so-so,
hence the small portion
in his bento. I froze a bunch to try after I'm done rawing. The recipe makes a TON. 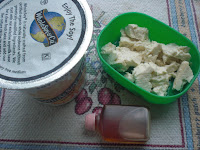 I was worried that this
wouldn't be enough food
for him, but then I
realized that his snack
was pretty hearty today.
His class has been studying
Greece for the past few
weeks (not sure why),
and today they were going
to be trying a few Greek foods: yogurt w/honey, feta cheese, and olives. So I sent along a soy yogurt w/maple syrup, and some crumbled firm tofu. He came home full enough, speaking Greek to everyone and showing off pages of words he'd written all in Greek.

So in preparation for the Q lunch (I couldn't shake an image of Q from Star Trek: TNG making the lunch for me with the flick of a finger, then making it quack or something ridiculous), I made the tofu quiche for dinner the night before, along with lots of onigiri. In order to avoid supreme food jealousy on my part, I created some raw sushi... 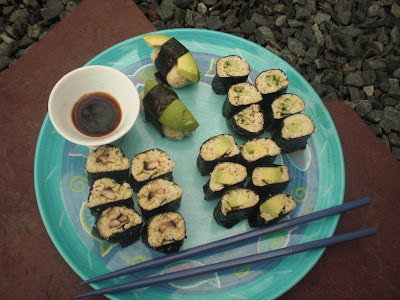 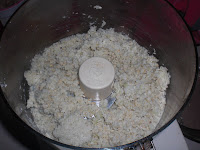 I created the rice alter-
native with the remaining
cauliflower I had on hand,
with vinegar to give it that
sushi rice tang. 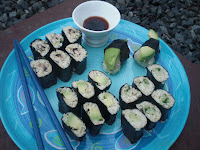 Put all ingredients into a
food processor and blend
until granular.

I love your alphabet bentos. I am always amazed at what your come up with, and the raw sushi looks delicious.

Creative use of the sideways P, good job with the quinoa and quiche! Sushi looks very good too. Lovely.

What a shame the paella didn't go over so well. That's a lot of food to have leftover and no one eat it. Hopefully you'll enjoy it. I sushi looks fabulous!

Well, my husband ate a lot of the leftovers. And I froze a bunch for me. Plus I brought a lot to grandma since I often deliver her meals and she loved it, but she's always liked quinoa, so it definitely didn't go to waste!