The Next Bento: Impossible

For my second installment of Bento: Impossible, I used another cookbook index and randomly chose Beets, Cucumber & Pizza as my ingredients. 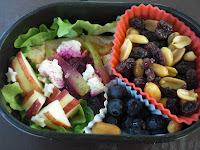 Here is the final bento with
a slice of the unique pizza
tucked in there on the left,
along with some striped
apple chunks, peanuts &
raisins, & blueberries. 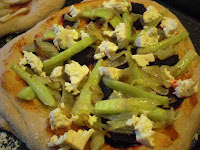 layer of red sauce. Then I
sauteed some onion until
carmelized, adding some
strips of cucumber near the
end. I had already roasted
some beets, so I peeled one
and sliced it thinly, adding
that to the pizza, followed by
the onion & cucumber. I
finished it off with a little crumbled firm tofu, then baked the pizza for another 8 minutes. 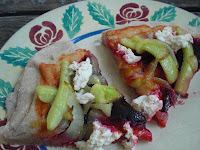 My husband isn't a fan of
beets, but even he tried
a piece. I thought it was
pretty good! I'm not sure I'd
use beets on pizza again.
But the cucumber was
actually yummy, especially
with the onions.

So for the next issue of Bento: Impossible, the theme with be Harry Potter. Hopefully that will get a few people interested in posting besides myself!
Posted by veganf at 6:07 PM

I've been interested in your challenges I've just been so swamped this summer!!

However, a Harry Potter challenge I will lose sleep for :D