More recipes this week from Tomato Blessings and Radish Teachings. 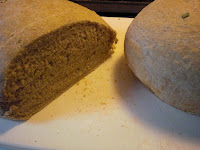 First up was Focaccia:
Olive Oil Bread with
Fresh Rosemary. The
recipe said it would also
be great as round loaves,
but in the future I think
I'd prefer it flat. It was
tasty though. 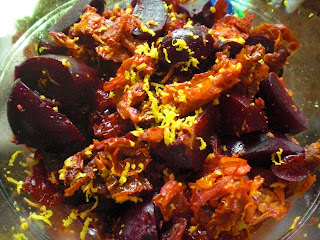 Next was a most intense concoction, Baked Beets with Dried Cranberries and Sun-Dried Tomatoes. Whoa! Strangely yummy, but no one else would touch it. 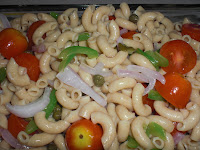 Finally, Macaroni Salad
with Tomatoes, Bell
Pepper, and Red Onion.
This was a good idea, but
rather bland. The capers
saved it. But I must admit
that after trying a few bites
I globbed on a bunch of my
own pesto, and then it was fantastic! LOL.

Only problem with my new camera-download-to-laptop situation is the lack of photo editing software. I'll have to try to remedy that soon, because dark pics and red eye are annoying!!
Posted by veganf at 5:58 AM