It's snowing. Again. Definitely time for a soup recipe post. A bunch of them. So here are my recipes for a few satisfying yumminesses I've showcased in Ryan's Thermos and at home during the past few months, and an old fave...Happy New Year!

My vegan version of Chik'n & Stars. 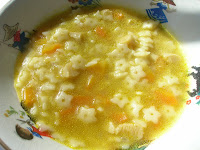 Cook onion & carrots in olive oil over low heat until onion is very soft.
Add broth & salt, bring to a boil.
Add pasta, reduce heat to medium, stirring often.
After about 10 minutes add the chik'n strips. (Add extra water if soup becomes too thick.)
(If you don't want to use faux meat, try adding 1/3 cup of red lentils when you add the broth instead.)

Creamy goodness. And you can change it up by adding chopped broccoli, parsnip, or winter squash when you add the potatoes.

Cook onion & garlic in olive oil over med-low heat for a few minutes until they begin to soften. Add all but remaining ingredients except for the beans and cook until vegetables are just tender. Add beans and cook another 15 minutes.

Add an extra jalapeno and clear your sinuses baby!

Cook onion, garlic & 1 of the jalapenos over low heat until soft.
Add black beans, cumin, oregano, 1/2 the cilantro, 1/2 the parsley, salt, pepper, 1/2 the poblano pepper, 1/2 the red bell pepper and the vegetable broth.
Bring to a boil. Cook for at least 1 hour at a slow boil, adding water if necessary.
Remove from heat. Briefly puree soup with an immersion blender, or ladle half the chunky contents from the soup and puree in a food processor.
Return to pan and add remaining ingredients. Cook for another 30 minutes.
Posted by veganf at 5:16 PM

There's nothing like a good bowl of soup and a roll to warm up in this cold weather! Thank you for all the recipes!
I wish you and your lovely family a wonderful 2009!!

Happy New Year! Thanks for STARting us off with such warming yumminess!

Oh my gosh, Chicken n' Stars was my absolute favorite when I was a kid. You even got the weird yellow broth color! I'm definitely keeping this recipe. I'm planning on making potato and leek soup soon too, as I got both of those in the csa box last week.