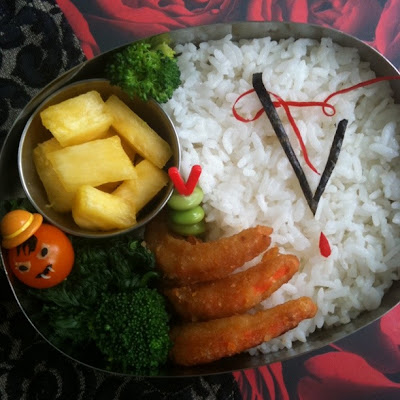 I'm a huge Vampire Diaries fan. And the season 3 premiere is coming up this week. I had some grand plans, only one of which has made it to reality thus far. This bento is MINE. 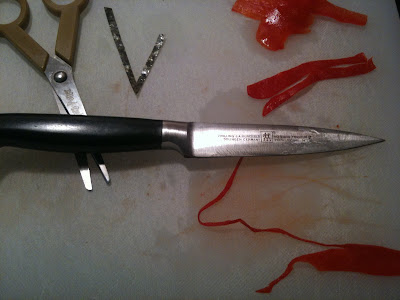 I created the ribbon and blood drop out of blanched red pepper. And I added baked some Sophie's Kitchen vegan breaded shrimp (frighteningly realistic actually). 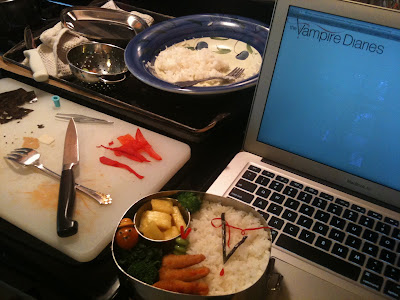 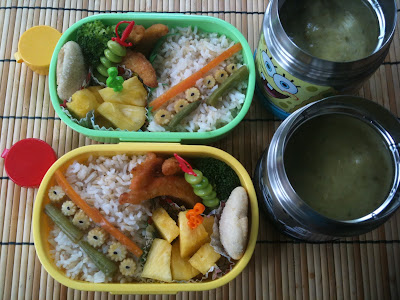 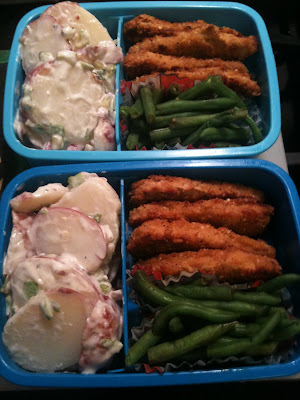 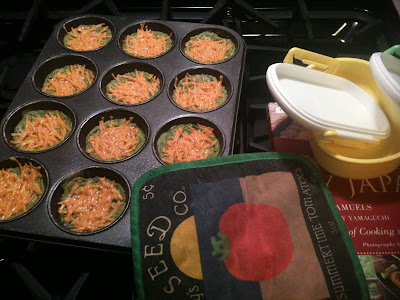 But potato week didn't quite go as planned. I pulled out these yummy spinach tofu quiches from the oven and popped in a baking sheet full of sweet potatoes wedges. Half way through, the oven promptly turned off and displayed an error code. Now, I love my new oven to bits, but according to the GE website, all error codes are proceeded by the letter "F", and all mine as showing was a red "5". Go figure. So I abandoned the sweet potato fries (yuck, half-cooked sweet potatoes? Hopefully the squirrels enjoyed them from the compost). Luckily I still had some rice in the rice cooker from the night before... 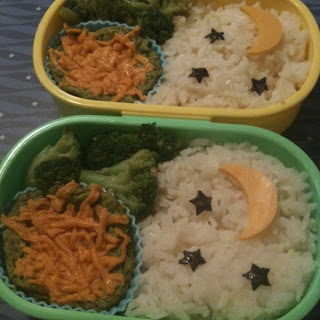 Ryan & AJ's lunches: garlic broccoli stir-fry; spinach tofu quiche w/cheddar Daiya cheese; rice.
By the next morning we'd solved the oven malfunction...by turning off the circuit breaker for the entire house (yes, we tried the individual ones for the kitchen first, but it was unsuccessful). 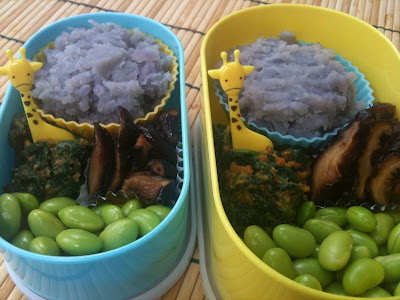 Where have you gone!?! I miss your posts. Hope all is well.

Wow, excellent collection of recipes. Do check out my new blog sometime- it's young and hopefully growing :)

Sad to see you are not updating anymore. Great source of Bento inspiration here!

I miss this blog. Your bentos are lovely and your recipes are delicious! Please come back!

Hey !! Amazing post. Thank you for sharing such a informative post. I read this article. I appreciate your work. satta king has turned into a real brand to win more cash in only a brief span. Subsequently, individuals are so inquisitive to think about the procedure of the game. Here we have brought a few procedures that will help you in understanding the best approach to gain cash by the sattaking. Also find the fastest satta king result & chart online at Online Sattaking

Thanks for your valuable post. Please post some more related topics. We are on your page only to read your blog because, as you know, there is no other as educative as yours. Like you, we also share some information on our site! So if any of you need any type of help visits our website. thoughtful good morning message

As I website possessor I believe the content material here is rattling great , appreciate it for your hard work. You should keep it up forever! Best of luck. 바카라사이트

You really amazed me with your writing talent. Thank for you shared again. 슬롯머신

Your article has a great deal of value for me. Your blog provides me with insightful. information that expands my understanding. The Custom Box Packaging provides you with long-lasting and visually appealing Custom Mailer Box Packaging.