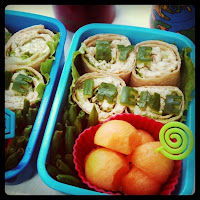 Hurricane Irene was
only a tropical storm
by the time it arrived
in Massachusetts last
week, but it was enough
to knock out power to
most of the state. We
were without electricity
for about 48 hours,
which was fine, except
for the refrigerator
situation! I was crossing
my fingers that we would have power back by tuesday for the first day of school so I could pack decent bentos of course! And luckily, the night before, shortly after 6pm, we were up and running again...just in time for my husband to arrive home from Seattle with no real idea of what we'd all endured over the past few days. 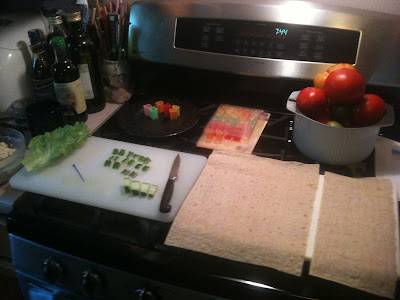 I managed to salvage quite a lot of the food. Since it's all vegan, and largely produce, most of it was fine without refrigeration. The hardest part was breaking the kids' habit of randomly opening the fridge to look for snacks throughout the day! 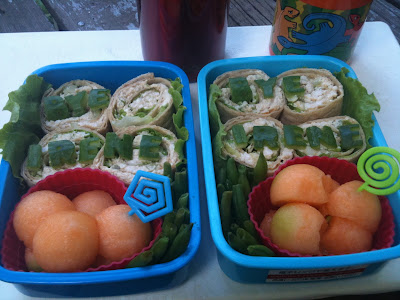 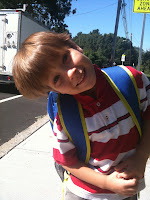 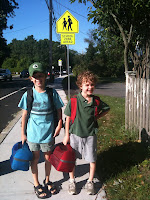 Here are Ryan & AJ off to third and second grades, and Nate ready to head off to his first day of kindergarten! His teacher has asked that I leave a selection of non-perishable snack items in his classroom, so no bentos for him until next year! Sigh. 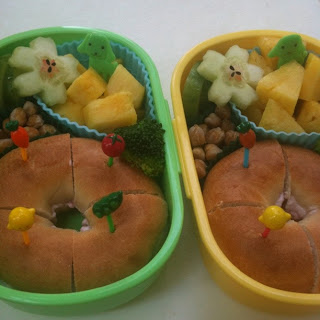 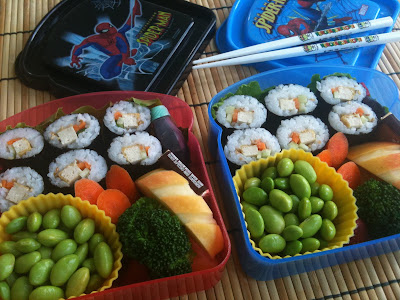 Time for some sushi! Ryan and I recently went to the new Wasabi sushi train at the local mall. It was very impressive and had him in a sushi sort of mood.
Ryan & AJ's lunches: sesame tofu & vegetable maki sushi w/side of soy sauce; tiny square of Lake Champlain dark chocolate w/almonds; apple slices; carrots; steamed broccoli; a strawberry; edamame. 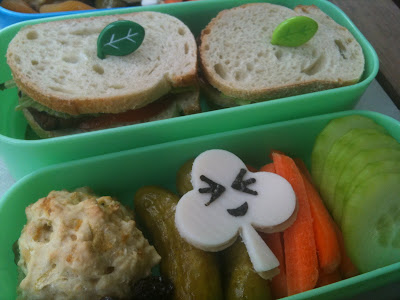 I was in the mood for smoked tempeh, so I sauteed some Lightlife Fakin' Bacon. I don't buy it often because Whole Foods has increased the price to just shy of ludicrous, but sometimes I just have to treat myself.
Ryan & AJ's lunches: tempeh, lettuce & tomatoes sandwiches on toasted french bread; mini zucchini muffin; dried apricots; pickles; Tofurky & soy cheese clover garnish; carrots; cucumber slices. 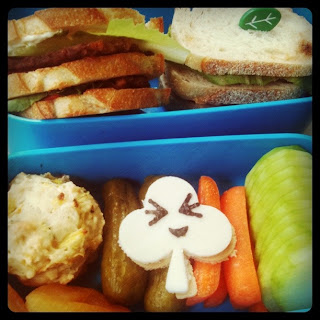 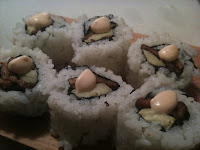 Now, for the reason I
REALLY bought the
smoked tempeh strips!
I dreamed this, and I
just HAD to try it:
smoked tempeh &
artichoke heart maki.
Yes, really.

I sauteed the artichoke hearts in Earth Balance and garlic powder until lightly browned. It was
delicious. But... 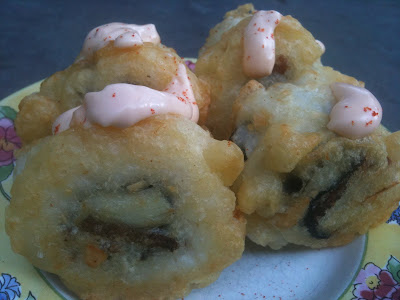 ...I had to fulfill the dream meal and tempura batter and fry more of them, topped with Sriracha laced Vegenaise. O.M.G. Worth every friggin' calorie. These would have made wonderful additions to a bento, but I could barely bring myself to share them at all, and they disappeared quicker than Harry under his invisibility cloak.

For a quicker look at daily bentos, vegan goodies, and environmental news, follow "veganf" on Twitter.
Posted by veganf at 9:32 AM

Your kids lunchboxes look so fun! How much time do you spend preparing them? My girls would just adore lunches like this!

It depends. If I'm using a lot of leftovers it doesn't take long. If I'm preparing fresh dishes in the morning it might take an hour. But I'm usually doing other things for the 4 kids simultaneously, so it's hard to say exactly.

i need to try the strawberry + cream cheeze!

So glad to seeing you post bentos again. I get lots of inspiration from you!

Have I already asked you where you get your gear? Robert won't let me order direct from Jbox in Japan, but we will be in Seattle and Hawaii this December. I hope to pick up more stuff then, like picks and boxes.

I'm glad Irene wasn't too rough on you - ask me about Ike sometime.

Those artichoke and tempeh bacon maki look amazing! At first, I thought you had drizzled strawberry cream cheese on them, though, and that you had lost your mind. I was glad to read that it was Sriracha mayo - whew!

Every time i come here i see something very new....
cement industry report


We bumped into your blog and we really liked it - great recipes YUM YUM.
We would like to add it to the Petitchef.com.

We would be delighted if you could add your blog to Petitchef so that our users can, as us,
enjoy your recipes.

Petitchef is a french based Cooking recipes Portal. Several hundred Blogs are already members
and benefit from their exposure on Petitchef.com.

To add your site to the Petitchef family you can use http://en.petitchef.com/?obj=front&action=site_ajout_form or just go to Petitchef.com and click on "Add your site"

Never be discouraged, keep up the good work, your blog is on top. Check out this: Why is a Pound Called A Quid