Summer is kale season. I take that back, it's ALWAYS kale season. But there are a lot more people growing it in the summer, even though it's one of the cold-hardiest veggies around. We even got kale FROM THE FIELDS in our winter vegetable share last winter! But with so much kale, you need an arsenal of recipes to keep it interesting. 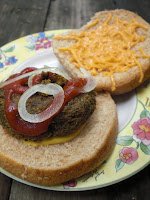 I've created many
permutations of my
kale sunflower patties.
I even used kholrabi
leaves & stems in place
of kale earlier this season,
and added some quinoa
and chick pea flours to
boost protein content
while keeping them
gluten-free. I also switch
the variety of nuts & seeds
around with whatever I have handy, often using walnuts or almonds instead of sunflower seeds. This is a great family-friendly way to use a host of local produce at once.

So here's today's version...and it got raves from the kids, which is always important!

Preheat oven to 375 degrees. In a food processor, add the kale leaves (stems removed) and the pecans. Process until no large pieces remain. Peel and roughly chop the potato and carrots. Add remaining ingredients. Process til relatively smooth. 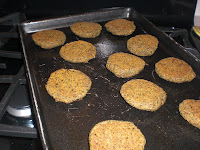 l baking
sheet with olive oil.
Spoon a big blob of the
pattie mixture into your
palm and make a
circular flatish shape,
then plop it onto the
baking sheet.

Bake for 20 minutes, flip with spatula, then bake 20 more minutes. Allow to cool for at least 10 minutes.
Makes about 10 patties.

Another fave (and I forget to get a picture) is kale potato soup. It's rather like my potato leek soup, but the leeks are not necessary, which can be handy for earlier in the season when leeks aren't yet big enough for harvest.

And here's another idea (though I won't share my recipe because it's just not healthy enough, LOL! No need to enable eating battered fried foods...but once in a while, yummmmm. Though I don't know which was less healthy, the food or the sauce I made to dip it in!) 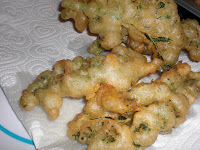 kale! I also made onion
rings while I was at it.
And I used an entire bottle
of locally brewed Harpoon
beer. Pwin!

But for healthier snack fare,
don't forget about good old
kale crisps--quick and easy. Or kale pesto to add to pasta, bread, sauteed veggies, etc. Still nervous to try kale with your family? How about steaming it and pureeing it into a red sauce for pasta or pizza or layering in a lasagna.

Summer is a great time to give kale a try. There are many varieties. Our CSA added a third type this summer, lacinata, otherwise known as "dinosaur kale". Supporting your local farmer's by buying directly from farms or at farmer's markets is a great way to help the local economy. But you may also donate to the Federation of Mass Farmers Markets directly via PayPal. Just visit this link to their website for more information.
Posted by veganf at 10:23 AM

Yay for Kale! Love all of the awesome uses for it :D We had a salad of kale and mango for dinner tonight!

These all look great! I have to say I'm dying to see the tempura recipe (and the sauce!) even if it isn't healthy........
Tinky
http://www.ourgrandmotherskitchens.com

I love the idea of adding greens to homemade veggie burgers. So many great ideas from this blogathon!