I volunteered to make the Stone Soup at Stearns Farm today. This meant I would be preparing food mostly outdoors in 40 degree overcast weather with only cold water available from an outdoor faucet and only a 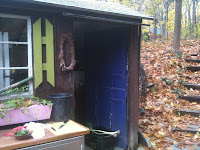 small plug-in electric
burner. And I had to get
most of the ingredients
from the seconds and left-
overs in the farm's root
cellar. But I came prepared
with a bag of red lentils, a
can of black beans, and my
bottle of liquid hickory smoke to add just a touch of something different for the farm staff.

All the soups at the farm 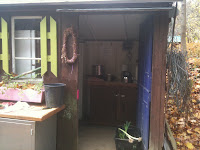 are vegetarian, usually
vegan, so this was a piece
of cake for me. What wasn't
a piece of cake was the fact
that I wanted to bring a
little something extra to
accompany the soup...which was a good thing, because they were out of bread. BUT the farmer has recently switched to a gluten-free diet, AND I didn't want to exclude anyone that might happen to be anti-soy. SO whatever I made had to be vegan, gluten-free, and soy-free. 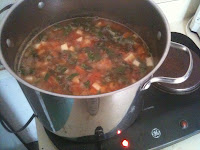 So before I left for the farm
in the morning I whipped
up what I hoped would be
a decent batch of muffins.
No wheat flour. No Earth
Balance margarine. None of
my usual crutches. 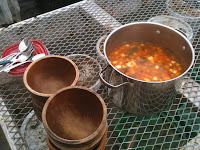 I had just broken down
most of our jack o' lantern
pumpkins, including one
pie pumpkin from the
farm. It was already in
the fridge cut, steamed,
and ready for use. So
pumpkin muffins they
would be! 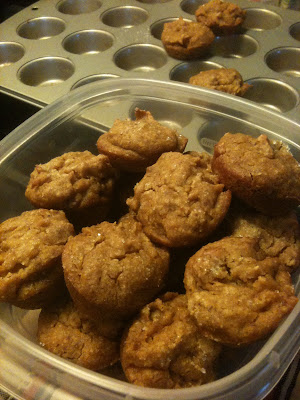 I sub-
bed
coco-
nut
oil &
maple
syrup
for my
usual
melted
marg-
arine.
This
res-
ulted
in a
slightly
greasy
exteri-
ior to
the
muffins,
but the flavour was absolutely fantastic, so I think it's worth posting the recipe of my crazy concoction. The kids and my husband tested them first and absolutely loved them. They commented on the different texture (since they're used to wheat) but kept asking for more since they tasted so good.

In a large bowl, mix first 3 ingredients. Then prepare egg replacer, whisking with a fork until frothy, and add to bowl along with the vanilla. Stir well.
Preheat the oven to 350 degrees.
Puree the steamed pumpkin (or mash very well) and add to bowl, stirring to combine. Add the next 9 (dry) ingredients. Mix well. Add the walnuts (or your nut of choice).
Spray mini muffin tins with olive oil. This recipe made 30 mini-muffins so plan accordingly.
Fill muffin tins with batter just up to the top. Sprinkle a little sugar over each. Bake for 18 minutes.
Posted by veganf at 5:32 PM

Sounds yummy! I love pumpkin and am always looking for new ways to use it. :)

Well, we still love AJ's Pumpkin Muffins the best, but when we have to do gluten-free these are well liked.

I love your kids' lunches, they look awesome!