It's all Greek to me

So I think I figured out why Ryan's class is studying Greece--the Olympics? Because that's where they started. So today's bento is Greek... 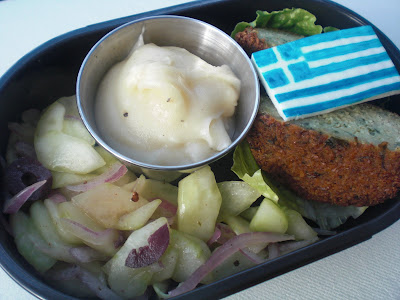 The cucumber salad I got to try because it's raw, hooray! It was very good. The recipe is on VegWeb here. Except I omitted the water.

Skorthalia is a Greek garlic potato spread or dip. VERY garlicky, but it smelled REALLY good when finished. Ryan and my husband tried it and loved it.

My plan was to have the falafel dipped in the skorthalia. Skorthalia is often served with sliced pita bread. Falafel may not have originated in Greece, but it is definitely served there and in most Mediterranean and Middle Eastern countries. I'll admit I had my husband stop off at the Turkish restaurant Subs & More to pick up a side of falafel last night. 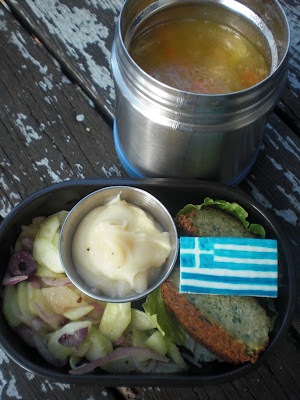 On the
side, I
packed
a Ther-
mos of
Fasso-
latha,
the
national
dish of
Greece!
It is a
fantastic
and
simple
soup
that
Ryan
was
eager
to try.
He wrote
down all
the ingredients to all of the recipes to show his teachers. We used canned cannellini beans instead of dry beans.
I guess I'll consider this my first bento for River's Eating Around The World project!

On to my food from yesterday... 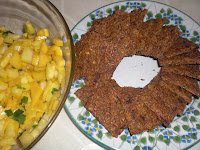 Let me just say that the
flax crackers are filling!
That's a great thing when
eating raw, because although
most people who eat a raw
diet long term eat A LOT
at one sitting, I do not want
to stretch my stomach like
that since I am only doing
this temporarily. So foods like raw crackers are great. They take a little time to make what with waiting for them to dehydrate, but they are worth it, and last for days. I use a recipe from Juliano's RAW for these, but I vary it by doubling the recipe, using half milled flax seeds instead of all whole flax seeds, a combo of cilantro & spinach and less of it instead of heaps of cilantro, considerably less jalapeno, and I actually skimp on the olive oil.
Basically they're flax seeds, sundried tomato, regular tomato, bell pepper, garlic, jalapeno, salt, cilantro, spinach and olive oil. They dehydrate at 90-95 degrees F for 4-5 hours, then I cut them with a rotary pizza cutter, then dehydrate for another 5-6 hours. They are crunchy and a little chewy, great for spreading, dipping, or eating plain.
Posted by veganf at 7:06 AM

I made an edamame skordalia. My husband gave me the recipe to make for dinner and at first, I thought, "what is this?!!", as I've never heard of skordalia. But I made it and it was quite good.

Edamame would be different...where did he get the recipe?