Yes! We've been away. Instead of holiday travels, we pulled the kids out of school a week early. Three important planets aligned: low airfare, low house rental rates, and no business trips for my husband. Outta here!!!
And what this also meant... short lines at Universal Studios' new Wizarding World of Harry Potter attraction. So many people have asked me to review our visit there that I didn't want to delay... so have your wands at the ready and grab that portkey! 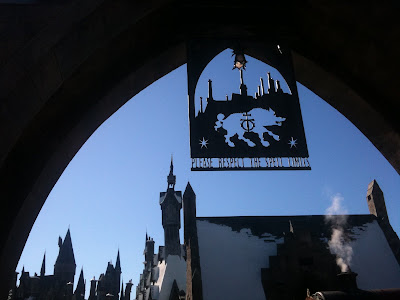 As you would expect at a Florida theme park, the wizarding world was very realistic and detailed. Hogsmeade village is located in the northeast corner of Universal Studios.
The Dragon Challenge roller coaster is the most intense ride, not for young children (so we could not ride it due to the height requirement of 54", not to mention I don't think I could have stomached it anyhow). This coaster existed before the installation of the Harry Potter portion of the park, and I believe it used to be called the Dueling Dragons (my husband rode it back when we were there a decade ago, before kids). It is a double inverted coaster, where your legs dangle freely. This is the only dueling inverted coaster designed by the Swiss inverted coaster pioneers, Bolliger & Mabillard. You might want to ride this one before you've had a few butterbeers & bottles of pumpkin juice! If you're not sure (and don't mind the ride spoiler) you can check out the ride via YouTube video here.

And yes, you can 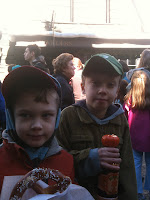 indeed try
some butterbeer and pumpkin
juice. Now the butterbeer is
not vegan, or even vegetarian
as far as I know, so I can't tell
you anymore about it. But the
pumpkin juice, although
sweetened with sugar, was
quite delicious! Its primary
ingredients are apple, pumpkin
and apricot juices. It has lovely
subtle spices, but mostly it's the
apricot juice that gives it such a nice flavour in my opinion.

The boys shared a big salty soft pretzel as well. There was a food stall that was heavy on fresh fruit: watermelon wedges, grapes, oranges, etc. But we ate largely the food we'd brought, to save money, since the admission into Universal's Islands of Adventure is already a small fortune.

If you are interested to know what other food options are available, check out PurpleChocolatHome's review here, which includes photos inside The Three Broomsticks restaurant and Honeyduke's candy shoppe, or Mouse Planet's muggles guide to The Wizarding World of Harry Potter here. If you're any variety of vegetarian and you plan to eat at The Three Broomsticks, you'll be ordering a meal full of side dishes. There is also a salad available, and a vegetarian potato leek soup. Another vegetarian blogger reviewed the food here. 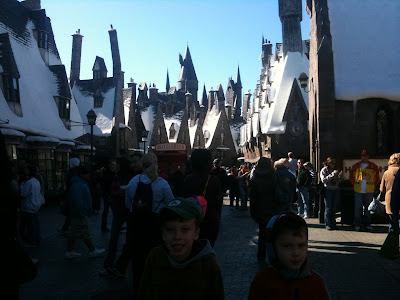 The other thing we had going for us was the weather. The cold (for Florida) weather kept people away, plus it was a weekday, plus we were there before schools let out for the winter holidays. Triple win. Instead of wait-times of 2-3 hours for the most popular ride, the official ride times were 30-40 minutes, which actually translated to a 10-15 minute brisk walk through the twisting passages of Hogwarts castle...something you won't want to miss whether you choose to go on the ride or not. 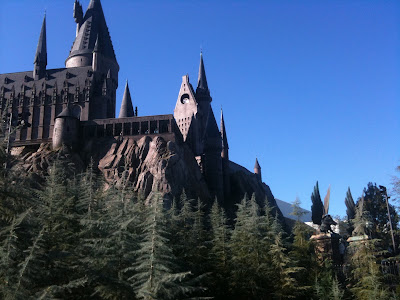 The most popular ride is the Forbidden Journey. The height requirement is 48", about the size of the average 7-8 year old. AJ just barely met the requirement at age 6 3/4. The line for the ride takes you through many rooms in Hogwarts, such as Professor Sprout's greenhouse, Dumbledore's office, the portrait gallery, and the Defense Against the Dark Arts classroom (with holograms of Harry, Ron & Hermione very convincingly informing you about your impending journey). The animated portraits were exceptional! 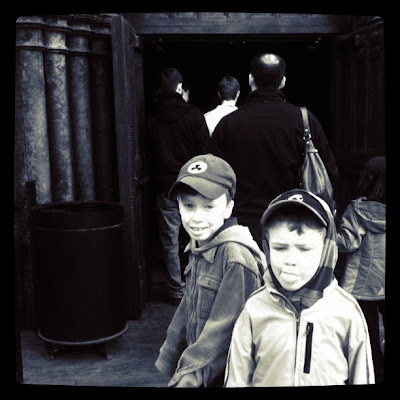 AJ pretty much kept his eyes closed through the entire ride...the first time. But Ryan convinced us to go again, and AJ and I were both able to enjoy it more the second time. And then we went a third time! It quickly became everyone's favourite. It's sort of a combo between a roller coaster and motion simulator, with multiple concave IMAX style screens interspersed with animatronics. You might also get spit on by giant spiders, or receive a steam bath in the face from a fire-breathing horn-tailed dragon. The ride seats 4 people in a row--I could reach AJ's hand around the seat-barrier though I couldn't actually see his face due to the restraints that prevent you from falling out or leaning too far forward.
If you have already been on the ride (or don't mind spoilers) there is a YouTube video of The Forbidden Journey at a fan site here... it is shaky and often in the dark since it was clearly taken with a cell phone (which is actually not permitted during the ride, though there are small compartments in the back of each seat to store small items like cell phones, glasses & hats during the ride). 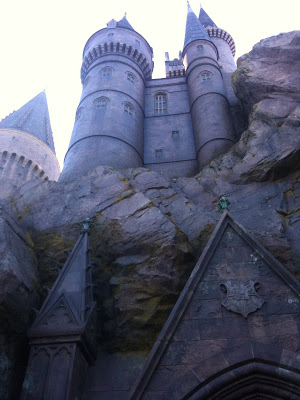 The
ride
spits
you
out
into
Filch's
Empor-
ium of
Confis-
cated
Goods,
a dark
and
crowded
gift
shoppe
where
you
can
view
(and
purch-
ase) the on-ride photo of yourself if you'd like. Gryffindor scarves were very popular attire the day we were there. From there you can return to the school locker rooms (if you have a bag or backpack with you, you have to leave it in the free lockers for the ride). 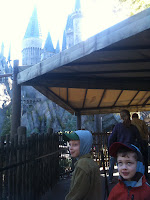 there you may as well
head just across the way to
the tamer Flight of the
Hippogriff roller coaster. A
shorter more family-friendly
coaster, we rode this ride so
many times we lost count!
The roller coaster cars seat
2 people, and the height
requirement is only 36".

The queue leads you past a
beautiful rendition of Hagrid's hut, and the coaster's initial ascent affords an otherwise hidden view of Buckbeak's nest. Once again, the wait time was listed as 10-15 minutes, but in reality it was no more than 5 minutes. If you have a smartphone you can also download the Universal Studios wait-times app so you don't have to trek around the park only to find out your favourite ride's line exceeds your patience. Unlike Disney theme parks, Universal Studios charges extra for its equivalent of the Disney "fast pass". 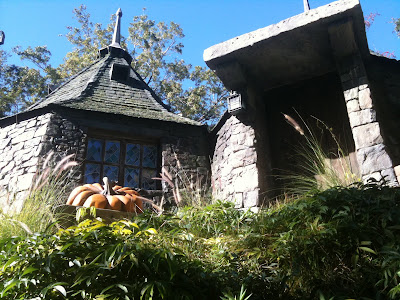 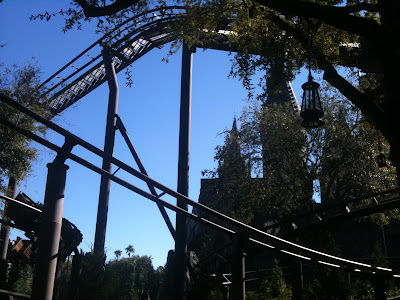 The one attraction we did not want to wait in line for was Ollivander's wand shoppe. The line was outdoors and Ryan had already purchased a wand at the stall just outside of Filch's. Apparently Ollivander's stages a recreation of the wand choosing the wizard scene in the Harry Potter and the Sorceror's Stone film. But during peak hours only about 1 in 20 kids will be chosen to participate, so don't count on it being an interactive experience.

Other shoppes include Dervish & Banges (for magical items), Zonko's (for you pranksters out there), or have a postcard canceled at the Owl Post post office. 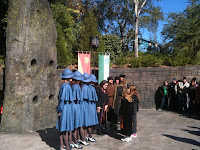 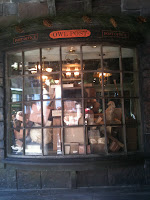 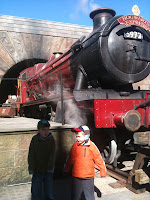 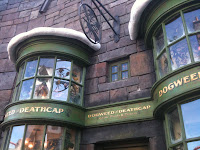 Be prepared to window shop, unless you have a hefty bank account! There are so many irresistible magical items to choose from. But you can always buy online later. 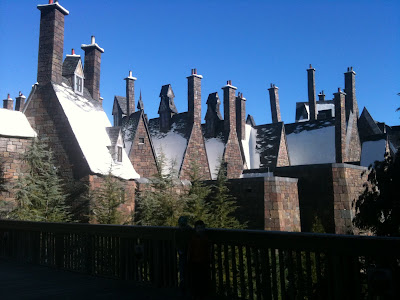 You can save a bit of money on accommodations by renting a house in the Orlando/Kissimmee area like we do, especially if you have a large family or are getting a bunch of friends together to go as a group. Renting a house not only saves money and gives you privacy, but you can save money on food and eat healthier home-cooked meals. And you are always allowed to bring packed lunches into the parks with you! Here's one last review I found that has some good videos & info.
Posted by veganf at 12:30 PM

Sounds like a great trip! I'd love to go someday!