Ever since the boys got in to Spongebob, my kale-sunflower burgers were no longer called "cookies" and were instead dubbed "krabby patties" from Spongebob Squarepants. Sigh. So here's Ryan's krabby patty lunch from The Krusty Krab, which he swears are vegan becauce Spongebob adds lots of veggies to them and no one knows the secret krabby patty formula that Plankton is always scheming to steal. I even have to make a smiley face with the mustard like Spongebob does. 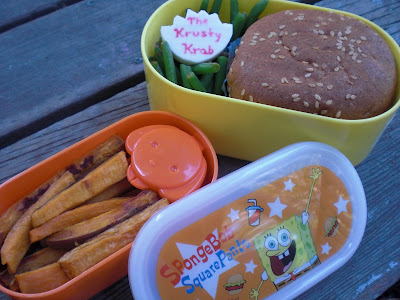 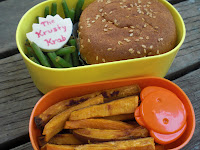 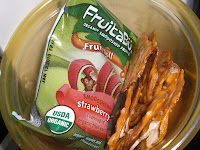 Both boys need to also bring
a morning snack. I'm not
going overboard with it (I
want them to eat their lunch
after all), so they both had
the same: an organic FruitaBu
fruit roll and some flat
pretzels.
Posted by veganf at 7:11 AM