So a bunch of online friends of mine are doing the cookbook challenge where you vow to make at least one recipe per week from one of your lesser-used cookbooks. I've read Tomato Blessings and Radish Teachings, by Edward Espe Brown cover to cover, but made maybe one recipe. It's a great read, but now time to taste it! I vow to make one recipe per week through the end of the summer.

My first recipe is: Beet Salad with Watercress

I was feeding this to the kids too, so I opted to use some mixed greens from the farm instead of the watercress. Ryan especially loved the beets, which I was pleasantly surprised about, considering they're seasoned heavily with balsamic vinegar and allspice... 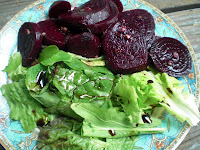 So what are you waiting
for??! You know you've
got a pile of cookbooks
just waiting to be used.
Join the challenge! What
new meal will you be
trying this week?
Posted by veganf at 11:08 AM