AJ decided he liked asparagus this week! Hooray! I had previously only been able to get him to eat it disguised as a green bean in a salty asian sauce. Ryan was very enthusiastic when we bought it at the supermarket, and AJ repeated him, praising the green vegetable repeatedly as they zipped around the produce department. But even at his pediatrician appointment this week, when asked his favourite foods he said, "Carrots, asparagus, and mashed potatoes."

I never demand that he try anything. I don't think that helps a picky eater at all. I just present a piece of whatever it is along with the rest of his food. Everyone talks about how delicious their food is and we model eating it again and again. It's fun to watch him very slowly add to his repetoire.

And in other news, 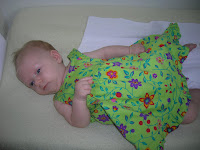 Maia is 2 months old
today! So here is a pic
from earlier in the
week. I have yet to
take the obligatory
2 month photo yet
today. But she is 10
pounds 10 ounces
and 23 1/4 inches long. 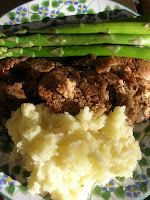 Here's a photo of the famous
asparagus meal, along with
"Neat Loaf" from the
children's book Benji
Beansprout Doesn't Eat
Meat, and some mashed
potatoes. The Neat Loaf didn't
hold together like it should,
but since it was a kids' book,
I followed the recipe as a child
would and did not use a food
processor. Ryan wants to try
it again at Thanksgiving anyhow. 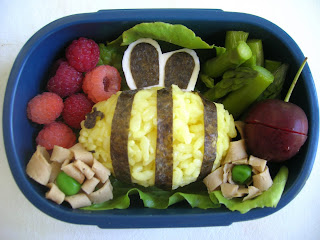 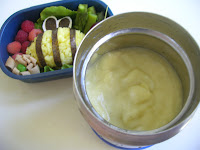 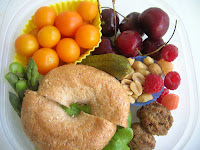 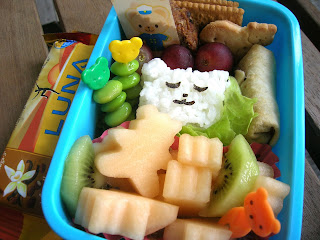 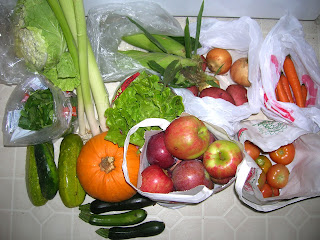 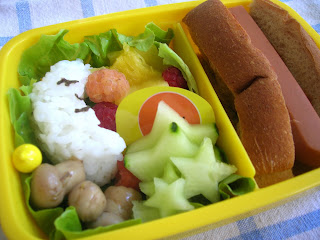 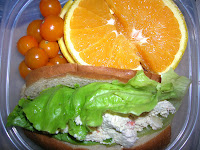 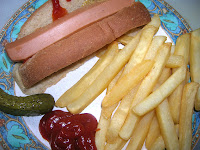 My lunch: HA! See, I
have my bad food days
like anyone! "Good Dog"
with ketchup & mustard
on a whole wheat bun;
french fries; a pickle. 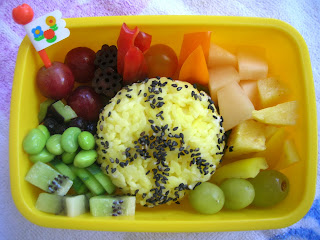 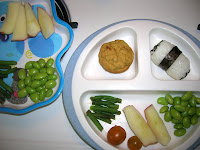 I always tell Ryan "NOTHING BLUE!" But I just had to try this food coloring technique from Lunch In A Box. So I guess now I'll be getting requests for blue Pokemon in the future, sigh. 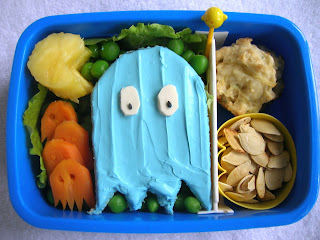 Next week AJ & Nate start preschool, so I'll be overwhelmed with cute bento photos! See you then!
Posted by veganf at 6:11 AM

I am so inspired by all the beautiful ways you represent your families food! How do you make your rice for the onigari?

I use a Zojirushi rice cooker on "soft" setting. I'll save onigiri overnight to use the next day, but otherwise it goes right into the freezer; then I nuke it 20 seconds each side and do any embellishing an hour or so before the lunch leaves the house.
As far as shapes go, I have actual rice molds, but I also use everyday kitchen items such as an egg cup, cookie cutters, etc.

oh cool. I never thought of making it ahead and freezing it. Not that I have any room in freezer right now. Do you use sticky rice or just jazmine rice or is onigiri a type of rice on it's own?? Also, are there punches and stuff to make the eyes and noses an mouth for some of the embeleshing or is that all cut by hand? I went on ebay looking at bento boxes and accessories cause I love your sauce holders and little toothpicks with characters on them. I didn't find much though. Is there a special store you go to for those items? I can see an obsession developing for me here.

I often use sushi rice for making onigiri, but regular sticky rice is traditional.

There are punches you can buy that cut the nori faces, but you can also do them by hand. I do some of both. Scrapbooking punches can be bought at craft stores to make lots of cool designs.

EBay is a great place to buy stuff, but it's good to narrow your search, ie. "bento cup", "bento baran", "rice mold", etc.
Ichiban Kan is the cheapest US online bento shop, but there are others. Sugarcharms has a lot of neat bentos but they are expensive.
Craft stores, kitchen stores, party stores, all have items that can be used in a bento if you'd rather buy locally versus online or overseas.

I'm so very impressed with your bento boxes! I just wish Roo would eat those foods!